This is not a rehearsal...

Hey all!
So, our next regularly scheduled shape-note singing will be this coming Saturday, January 18th.  IF and WHEN we manage to squeeze in another weeknight singing, you'll see it posted here and we always try and send an email out, too.  Holler if you want to be on our email list!

In other news, WREN members will have received their new issue of WRENzine in the mail this week, and if so, you'll find a little story about shape-note singing that I wrote.  Hopefully it'll inspire some new folks to give singing loud a try!

Check out the hard copy because it has pictures along with lots of other interesting articles, but hey--while you're with me--here it is (with all my mistakes included), for your reading pleasure: 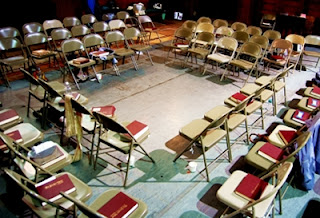 This is not a rehearsal.

The basics of shape note singing are simple.  It has been done for hundreds of years.

A group of men and women gets together and sets up some chairs in a hollow, inward facing square.  The tenors sit down across from the altos.  To the right of the altos sit the basses.  Across from them, the trebles.  Both men and women sing tenor and treble in their respective octaves, creating six distinct musical parts.

Everyone has their Sacred Harp tune books on their laps.

Someone calls out the page number of the song they want to sing.  Someone else sounds the starting pitch.  We don’t sing the music in the key that it is written on the page.  We sing it wherever the designated pitcher deems appropriate for that group, in that moment, in that space (typically much lower than where it is written).
The group breaks into song, belting out the solfege syllables that correspond to the shaped note heads in their tune book-- Fa Sol La and Mi.
We “sing the shapes” in four part harmony, and then we sing the words.  The words may challenge our beliefs and convictions.  The words may heat our veins or soothe our souls.  Believe them literally, or don’t.  You’re welcome regardless of what these words mean to you.

The leader sits down and it’s the next person’s turn.
We repeat this process until we break to eat.  With full bellies and empty bladders, we get back to it.  We sing our faces off.  We sing at the top of our lungs.
We sing like our lives depend on it, because frankly, they do.

There are a million ways to experience the hollow square, but once you’ve been to enough singings, every hollow square will feel like home.

Fifteen years ago, my incredibly energetic high school biology teacher, Susan, took me on a trip to Vermont.  It was the Green Mountain state’s turn to host the annual New England Sacred Harp Convention, which rotates through the seven New England states each year, skipping only New Hampshire.

Susan had introduced me to all kinds of traditional music, from toasting songs of Caucusus Georgia to Irish fiddle tunes.  Shape note music is what stuck.   We got up early that Saturday morning and tooled up 91 North from her house in Shutesbury, MA, arriving at a white clapboard church in the middle of nowhere, Vermont, shortly after 10am.

The walls of the church shook with the voices of 100 - 150 people from around the country singing their hearts out in four-part harmony.  There were no instruments.  There was no practice session.  These people were just singing.  They were singing so hard that their faces were red and they were sweating like rock stars, despite the brisk, autumn air.

I had learned what the shapes were for from Susan, and I had practiced singing the syllables that go along with those shapes, but I was completely unprepared for the tidal wave of sound I experienced in that old New England church.

I let this unfamiliar music wash over me.  I sat in the treble section at first, mostly because there was a seat unspoken for, and besides, I had (sort of) sang soprano in choirs.  The treble part sits in a similar place on the musical staff.

I attempted to follow along, using my finger as a guide and occasionally uttering the right syllable (but the wrong note), or singing the right note (but some combination of all the wrong syllables -- “Fflsaw!!”  Shoot!  I mean, “La! Mi!  Dang!!”)

I’m happy to have come to Sacred Harp music as an impressionable 15 year old girl.  I had no preconceived notions about what this music was.  I had never heard of it until Susan introduced it to me.  And honestly, I didn’t know a lot about music at all besides the James Taylor and Roy Orbison my dad was fond of playing (on the 8-track player in our 1971 Suburban) and the top 40 music my mom would listen to on the kitchen radio in the mornings while shooing my brother and sisters and I out the door for school.  I had sung in some choirs, but mostly because I had to.  Susan introduced me to Balkan music, and to shape note music and that changed everything.  Turns out I’ve got a voice (you do, too).

So here we are in Northern New Hampshire, where the absolute closest singing is two hours away.  That’s the first thing I did when I decided to move here--I figured out where the closest singings were, and whether it was viable to attend them regularly, or if I’d have to start our own.

Here we go.  We’ve started our own.  So North Country Sacred Harp is born, and we hope that you will be a part of it.  We’re singing like our lives depend on it and really, you ought to as well.

Last year’s series of singing schools were an exciting start.  The folks who have tried it out so far are singing loud and laughing a lot.  We look forward to hosting a regular monthly singing and we hope to see you all there!

We’ll be singing loud every third Saturday evening.
www.northcountrysing.com is the place to go to learn more, to join in, to make a joyful noise.